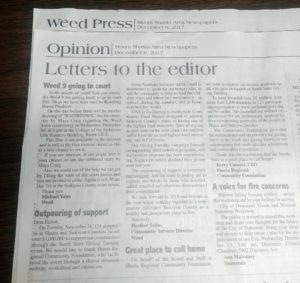 A letter to the editor published in the Mt. Shasta Area Newspapers, Dec 6, 2017.

On Tuesday, November 28, 124 nonprofits in Shasta and Siskiyou Counties raised over $1,000,000 to support our communities through the North State Giving Tuesday event. We would like to thank Shasta Regional Community Foundation, who facilitated the event through a shared donation website, workshops, and incentives. Great Northern Services’ (GNS’) staff is determined to speak for our hungry kids, to ask the community to help us feed the children when and where they most need it – in school, during the summer, and at home over holiday breaks. GNS is facilitating a countywide Community Food Project designed to address Siskiyou County’s status as having one of the highest food insecurity (lack of regular access) rates on the west coast. Our children suffer from the second highest food insecurity rate in California. Our Giving Tuesday campaign focused on supporting child nutrition programs, and the positive response has been overwhelming. Supporters nearly doubled their giving over last year. The outpouring of support is extremely encouraging, and I would like to express thanks to those who donated, called, emailed and otherwise demonstrated their commitment. We look forward to 2018 and beyond as the time when working together as a community cultivates Siskiyou County as a healthy and prosperous place to live.