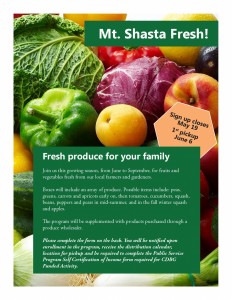 All applications must be completed and submitted to the Mount Shasta Community Resource Center, the Mount Shasta Recreation and Park District office, or Great Northern Services by May 19, 2016.

According to GNS staff, the program filled to capacity in its inaugural season last year, serving about 80 households. This year an even larger response is expected.

“The word has spread by word of mouth,” GNS program coordinator Heather Solus said. “Since enrollment is first come, first served, we are strongly advising people to enroll promptly this year.”

She emphasized that income limits for participation are higher than people might expect, and working families are often eligible. A family of four with an annual income of up to $45,000, for instance, qualifies for enrollment.

Mt. Shasta Fresh provides the free produce to participating households through the Farmer’s Market from June through September. Distribution locations will be announced to enrollees before the program begins.

This year people participants will be able to pick out their own produce rather than receiving it pre-bagged, Solus said. “We’re doing it ‘market style’ so people have more choice and there’s less waste.”

Mount Shasta City Finance Director Muriel Terrell said the city is “very pleased” to be able to provide the program again this year.

“It’s truly satisfying to be able to get nice, fresh, locally grown fruits and vegetables to those who may not have access to them otherwise,” she commented.

Applicants for Mt. Shasta Fresh must be residents living within the incorporated city limits of City of Mount Shasta and must meet income requirement guidelines.